There is one part of the western Christmas that is probably common to all of us, either directly or indirectly. Who has not participated in a Nativity play at school, or, at the very least, seen one as or with a proud parent?

We all know the story: the journey in response to the census, Mary and Joseph turned away from the inn, the angel, the shepherds, the Star, the three kings and baby Jesus in the manger.

What we rarely stop to consider is that this is a mishmash of two completely different and mutually contradictory versions of the Nativity. Of the four Gospels, only Matthew and Luke mention the Nativity and, in each’s version, the only point in common is the baby Jesus. Let’s look at the elements mentioned in each:

Matthew quotes the prophesies of the Old Testament prophets. Luke, on the other hand, quotes historical details such as the census. These observations tells us that Matthew was what we would now call and evangelist, while Luke fancied himself as an amateur historian.

Another reason for the discrepancies is that both Matthew and Luke were writing long after the events took place, hence describing circumstances and happenings that they could not possibly have witnessed. Most experts on these matters believe that both of their gospels were written around 80-85 AD. Some have argued that Luke was written early in the 2nd Century AD.

Therefore, at a time when the average lifespan of someone who survived beyond the age of ten[1] was, according to different estimates, between 46 and 48 years, the Gospels of Matthew and Luke were written two full average lifespans after the events of the Nativity had taken place.

So, here is a fact: the Gospels were, like the story of Robin Hood, based largely on an oral tradition of stories being handed down from generation to generation. While the story of Robin Hood was passed down the generations in ballads, the Gospels were passed down as preaching. No doubt they intended to be factual accounts but, every time that the stories were recounted, they would have changed subtly, with embellishments or mistakes. There would also be the inevitable wish to impress the audience for which they were written by emphasising events that added to Jesus’s divinity.

There is also a further point that is rarely, if ever, mentioned. Many Gospel translations make much of using the original Greek text. But when were these texts written? The very first fragmentary Gospels date back to the early 4th Century[2], but the so-called original Greek text used for modern translations was compiled by Erasmus in the year 1516, using different texts, many of them from the 10th Century. And therefore, when people speak of the original Greek test, they are speaking of a text compiled one and a half thousand years after the events took place.

Yet another problem also rarely mentioned is that it is now believed that the original Gospels were written not in Aramaic–Jesus’s mother tongue, but in Greek–the language of the erudite. However, at least some of the Apostles also had Aramaic as their mother tongue, and relied on stories told in Aramaic. What is worse is that there are phrases and concepts in Aramaic that have no Greek equivalent, and could have been translated into Greek only in a awkward and roundabout way. Luke often used Mark’s writings, but Mark wrote very poor Greek and did not hide the fact that his mother tongue was Aramaic. It is evident that Luke enjoyed correcting Mark’s spelling and grammar. Hence, it is fair to say that many of the subtleties of the Gospels were, quite literally, almost certainly lost in translation and in linguistic distortions.

In conclusion, here is another fact about the Nativity: it was intended to be a factual account, but it is full of distortions, both deliberate and unintentional.

That said, we know that many of the people and events mentioned in the Nativity story really existed.

Jesus: In the history of Flavius Josephus, originally a Jew, who became one of the most important Roman historians of the 1st Century AD, we find the following text in Chapter 3 of Book XVIII of The Antiquities of the Jews, written around 93 or 94 AD:

Now there was about this time Jesus, a wise man, if it be lawful to call him a man; for he was a doer of wonderful works, a teacher of such men as receive the truth with pleasure. He drew over to him both many of the Jews and many of the Gentiles. He was [the] Christ. And when Pilate, at the suggestion of the principal men amongst us, had condemned him to the cross, those that loved him at the first did not forsake him; for he appeared to them alive again the third day; as the divine prophets had foretold these and ten thousand other wonderful things concerning him.

In one paragraph, Flavius Josephus sums up the life and work of Jesus.

King Herod (Herod the Great): Much of what we know about King Herod comes from Flavius Josephus, especially the detailed description of his final illness and death, from what seems to have been a mixture of chronic renal failure and Fournier’s gangrene. Herod came to the throne in 37 BC at the age of 36 or 37, when he helped the Romans to overthrow King Antigonus Mattathius. Descriptions of him range from “the mad genius of the Jewish nation” to “a crazed murderer of his own family”. It is certainly true that Herod collected and disposed of wives in a way that made King Henry VIII look positively chaste, faithful and forgiving. The Herod family tomb in Jerusalem still survives today.

Augustus Caesar: First emperor of Rome. Described by Edward Gibbon as “a crafty tyrant”, he was one of the longest-ruling Roman emperors, formally from 27 BC to 14 AD but, in practice, he ascended to the imperial throne in 31 BC on the defeat of Mark Anthony at the Battle of Actium. Augustus declared global censuses in 27 BC, 8 BC and 14 AD.

Publius Sulpicius Quirinius: Tutor to the grandsons of Augustus, he had a distinguished military career and was Governor of Syria from 6-7 AD, organising a census in the region.

The shepherds: Shepherds still graze their flocks around the town of Bethlehem. Nearby we can find places with evocative names such as “Shepherd’s Hill” and “Shepherd’s Field”. 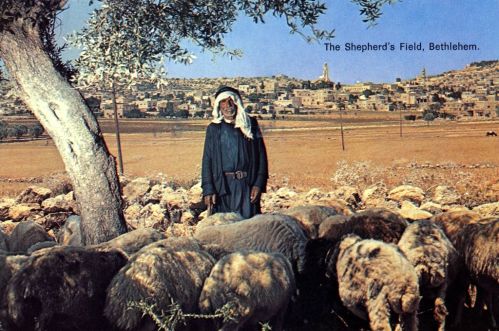 The Magi: Originally a caste of Zoroastrian priests in Medea in northern Persia and Armenia. Pliny the Elder wrote of the visit of King Tiridates to Rome in 66 AD: “Magus ad eum Tiridates venerat Armeniacum de se triumphum adferens et ideo provinciis gravis… quaereat aliquis, quae sint mentiti veteres Magi” – The Magian Tiridates was at his court… in token of our triumph over Armenia, accompanied by a train which cost dear to the provinces through which it passed… He brought with him, too, several other Magi.

Bethlehem and Jerusalem: Bethlehem is a small town only 10km south of Jerusalem and often in the news now for the wrong reasons. Although destroyed by the Romans in 70 AD, there is much about the Old City of Jerusalem that someone who lived in Roman times would recognise.

So, we see that all the elements of the Nativity story, as recounted by Matthew and by Luke, revolve around known historical places, persons and events. Around about the time of the Nativity, Caesar Augustus did order a census, Quirinius was his representative in the region, Magi did exist and there was a blood-thirsty King Herod, prone to depression and paranoia, who certainly executed one of his ten wives, sent another into exile and, in his last years before death, had three of his sons (two of them his heirs) executed for treason.

But when did the Nativity actually happened? In our next post we’ll look at the confused origins of our calendar. In this part of the story, a lunar eclipse, the census, and the shepherds are the key players.

[1] Infant mortality in Rome was an incredible 50% by the age of ten.

[2] A fragment of John 18 in the Rylands Library of Manchester University may date from the mid-2nd Century, but the exact date is hotly debated.