When, in 1968, the astronomers at the Ohio Radio Survey first detected a quite weak source at 1415 MHz, they little-realised its significance. It was catalogued as “OJ 287” – “O” for Ohio, “J” to indicate that it was between 8 and 9 hours Right Ascension[1], “2” because it was in the strip of sky between declination +20° and +30° and “87” for the decimal hours of Right Ascension. First identified early in 1969 with a 15th magnitude star-like object, it seemed to be a just another typical quasar, save that it had a featureless spectrum: we know now that this is the case because the relativistic jet emitted from the poles of the accretion disk in its heart is well-aligned with our line of sight – effectively, the light of the clouds a few light years from the black hole where quasar spectral lines are emitted is drowned out by the brilliance of the central singularity, beamed at us like a lighthouse beam.

What drew attention to OJ287 was the observation made just after New Year 1971, that OJ287 had brightened considerably. This brightening continued until, by the Autumn, it had reached V=12.0, one of the brightest magnitudes ever measured for a quasar. It would not return to its pre-outburst brightness until almost the end of 1973. Astronomers started to get interested in this object, especially when various groups reported that it showed rapid variability with periods from 15-40 minutes found at different times in different studies; it became one of the most intensely observed sources in the sky. This revealed that OJ287 had an unusually large range of variability. In B, the natural band for (mostly) photographic historical photometry, the range of variability was found to be from 12.5-18.5!

OJ287 was bright enough to have been observed hundreds of times by sky survey images since the late 19th Century. The first known images were taken as early as 1891. Looking at the historical series of data it was obvious that it showed multiple outbursts of 2-3 magnitudes that Mauri Valtonen at Tuorla in Finland noticed seemed to be quite regularly spaced. Initially he suggested that there was a period of ≈11.6 years in their appearance. There was also one interval in the past, around 1913, when OJ287 seemed to be especially bright and active.

Any periodicity in an astronomical object suggests either a regular pulsation, rotation, or orbital modulation. This allows you to understand size, mass and/or the physical constants of the object. 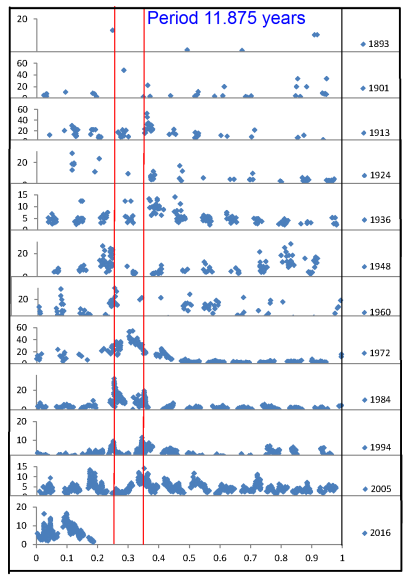 Phasing the observations of OJ287 around a period of 11.875 years (left), we see something interesting: the outbursts in 1948, 1960, 1972, 1983 & 1994 line up just about perfectly (left hand vertical red line), although we only see the start of the 1972 outburst. However, we do not see outbursts before 1948 when we would expect to and the two most recent outbursts have come much earlier than expected. We can also see clearly, especially recently, that there is a second outburst approximately 18 months after the first (right-hand vertical red line), but these do not seem to line-up either between 1948 and 1972. So, whatever mechanism is at work, it is not strictly periodic.

What Mauri Valtonen realised was that OJ287 is a (probably) unique object in which two supermassive black holes are orbiting each other in a highly eccentric orbit (eccentricity about 0.9, so rather similar to a comet’s orbit). When the secondary, with a mass of a mere 140 million solar masses, passes through the accretion disk of the primary (18.2 billion solar masses), which it does twice in each orbit at ascending and descending node, as it dives in to closest approach to the primary and then as it catapults out again, it sends a huge shower of material onto the primary black hole, causing the two outbursts that we see, separated by 18 months. Due to relativity, the whole system is precessing by 39° per orbit – in other words the alignment of the orbit swings around by

What this means for OJ287 is that approximately every 5 orbits, the precession reaches a total of 180° and the phase of outbursts in the light curve flips because closest approach of the secondary now happens on the opposite side of the primary black hole. Although the orbital period, as seen from Earth, is 12.055 years, the precession makes the average interval between outbursts shorter, hence the 11.875 year mean interval between outbursts. Mauri calculates that the light curve repeats approximately after about a century and exactly only every 900 years due to this precession.

Modern light curve coverage, a lot of it by amateur astronomers with increasing sophisticated backyard telescopes, has much greater density and superior quality, allowing the parameters of the system to be fine-tuned with each new outburst to the point that the maximum of the 2015 outburst was predicted to within 3 days: a Spanish amateur was one of the astronomers to capture the exact moment of maximum. The high-quality observations of the 2005 outburst – a campaign in which amateur astronomers had an important presence – even allowed the spin of the primary black hole to be measured to be 0.31±0.01 from the more exact timing of the outburst compared to previous ones for which the date of maximum can only be estimated.

The exact date of the final rise to maximum is critically dependent on the spin, with the date advancing the faster the singularity is spinning. So, the more outbursts that can be timed exactly, the better our knowledge of the spin, as well as the masses and orbital parameters of the two black holes. The value of the spin of the primary black hole could be refined further by the very exact timing of the 2015 outburst: The new value derived, of 0.372, shows that the singularity is still spinning quite rapidly, despite the natural tendency of black hole spin to slow with time.

several decades into the future. The predictions can be contrasted with the latest observations (see left). We can also estimate how efficiently extra mass falling onto the primary black hole converts into increased brightness.

In the prediction here we assume that:

The exponent is expected to be in the range 1-1.4 and different values give markedly different predictions of behaviour.

The observations from 2005 also produced a first hint of the validity of the “no hair” theorem (it states, simply that “black holes have no hair”). This theorem demands that a black hole can be completely and exactly defined by just three numbers: its mass, its spin and its electrical charge. The 2005-2008 observations confirmed this hypothesis to 10%: observations of the 2015 outburst have reduced this to around 3%. Observations of the predicted 2026 outburst could potentially confirm the no hair theorem to better than 1%. This is one of the few occasions that amateur astronomers in partnership with professionals and theoretical physicists will ever have the chance to second-guess Einstein!

OJ287 is currently declining still from the last maximum. The model (line through the data, above) suggests that this decline may go on for some months still. What is interesting is the very faint points in the V light curve. These are due to the secondary black hole, now moving away from pericentre, perturbing the beam of the relativistic jet and moving it away from our line of sight. In 1989 the minimum was so pronounced that, for about two weeks, OJ287 faded down to V≈17.5. Interesting things happen in these episodes: the colour of OJ287 reddens considerably, hinting at the presence of the underlying giant elliptical galaxy, normally completely overwhelmed by the brilliance of the quasar. An HST observing campaign hopes to exploit the current faintness of OJ287 to image the underlying galaxy in the visible for the first time; so far it has only been detected very faintly in the near-infrared.

As David Boyd’s photometry here, taken from his back garden observatory shows, 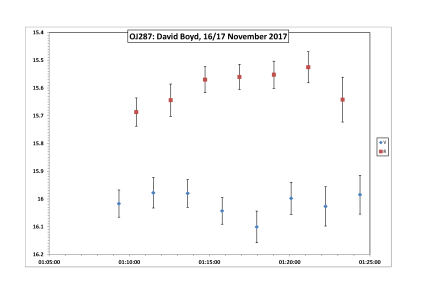 variations in brightness of OJ287 of 10-20% in a few minutes are far from unknown. On several occasions I have observed variations of close to a magnitude in an hour, both in the visible and in the near-infrared. These variations can be large enough and fast enough to be detected visually: in other words, an astronomer with an eye to the telescope eyepiece actually sees this amazing object, 4000 million light years away, changing brightness as he or she watches it. British amateur astronomer  Gary Poyner has reported doing this on several occasions in the past. It really is a quite mind-boggling thought that to see a variation like this visually means switching on and off in a few minutes the equivalent brightness of tens of galaxies like our Milky Way.

OJ287 is a fascinating object and the current minimum is helping to refine the models, both of the quasar itself and of its host galaxy. Observations, particularly sequences of data in more than one filter are particularly useful, but any contribution helps with the study of this singular system.

5 thoughts on “OJ287: A great test laboratory for relativity”